Given the ongoing traffic chaos in Great Shelford - a ruptured water main having led to the closure of Tunwells Lane - Brian took the decision to start Monday's outing well away from the trouble, at Winners in Little Shelford. But somehow that message didn't get through to Brian H who ended up touring the village looking for his pals. No worries; a phone call later, we were reunited and ready to roll.

Another no-hills route saw us visit Newton, Thriplow, Foxton, Barrington and Orwell before pulling in at Wimpole for refreshment at the Stables Café. Sipping our drinks, we lamented Cambridge United's inability to seal promotion; all hopes are now pinned on their final game.

The return leg, via Shepreth and Fowlmere - and against a buffeting headwind - saw us return to Shelford just before midday, having clocked up a total of 28 miles. 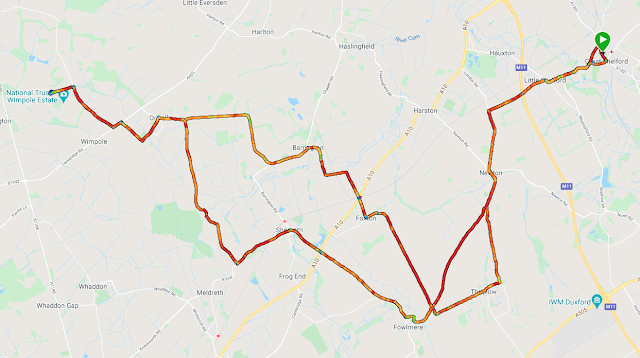 Popular posts from this blog

October 12, 2020
Monday morning saw two Brians, Jeremy, Chris and Phil heading out along the DNA cycleway . . . followed some fifteen minutes later by Jenny, Hilary, Alan and yet another Brian, heading off in a more westerly direction towards Grantchester; both groups bound for Cambridge and, ultimately, Milton. Along the way everyone paused for photographs on Garret Hostel Bridge, Hilary pointing out the fine architecture of Trinity Hall's Jerwood Library. Jeremy, Brian, Phil and Brian heading west on Garrett Hostel Bridge. Alas, we have no photo of Chris. Probably just as well; rumour has it he tried to relieve a passing cyclist of his laptop, though Chris swears it was accidental. On that exact same spot an hour earlier - Alan, Hilary and Jenny - heading east Brian struggling to frame a socially distanced selfie Alongside the bridge, the Jerwood Library All enjoyed coffee and cake in the café at Milton Country Park and returned to Shelford having clocked up a very respectable 22 miles. 22 miles
Post a Comment
Read more

December 14, 2020
Two groups of cyclists set off from Shelford bound for Madingley Hall on a glorious Monday morning; the first group comprising two Brians, Alan and Lewis - followed 15 minutes later by Jenny, Janet, Hilary and yet one more Brian. Christmas elves - Jenny, Hilary and Janet - guarding the Christmas tree at Madingley Hall Last week we froze, this week we were basking in sunshine as we clocked up 24 miles, stopping only to enjoy coffee and cake at the Hall.
Post a Comment
Read more

March 16, 2020
Little did we know this was to be our last outing for some months. The Great Lockdown was just a week away as Hilary, Jenny, Janet, Paul, Lewis, Jeremy, Alan, Christine, Phil and two Brians set off from Cara Coffee.  Alas, poor Phil sustained an early puncture on Trumpington Meadow and opted to turn back, leaving the rest of us to clock up 25 miles visiting Grantchester, Coton, Cambridge and Milton. Pausing for a breather on Garret Hostel Bridge Notable moments included BrianC's muddy off-road excursion around Hauxton, sipping coffee in the café that Alan built, BrianH's impromptu pub crawl, and Christine's close encounter on the guided busway; though we think the Cambus driver got a bigger fright than she did. The route was mercifully flat, give or take the odd bridge approach, and nobody fell in the river. Well done all! 25 miles clockwise
Post a Comment
Read more