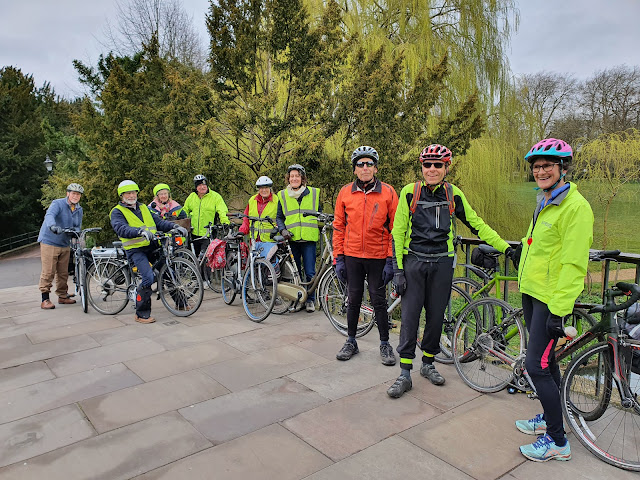 Popular posts from this blog

Monday morning saw two Brians, Jeremy, Chris and Phil heading out along the DNA cycleway . . . followed some fifteen minutes later by Jenny, Hilary, Alan and yet another Brian, heading off in a more westerly direction towards Grantchester; both groups bound for Cambridge and, ultimately, Milton. Along the way everyone paused for photographs on Garret Hostel Bridge, Hilary pointing out the fine architecture of Trinity Hall's Jerwood Library. Jeremy, Brian, Phil and Brian heading west on Garrett Hostel Bridge. Alas, we have no photo of Chris. Probably just as well; rumour has it he tried to relieve a passing cyclist of his laptop, though Chris swears it was accidental. On that exact same spot an hour earlier - Alan, Hilary and Jenny - heading east Brian struggling to frame a socially distanced selfie Alongside the bridge, the Jerwood Library All enjoyed coffee and cake in the café at Milton Country Park and returned to Shelford having clocked up a very respectable 22 miles. 22 miles
Post a Comment
Read more

Two groups of cyclists set off from Shelford bound for Madingley Hall on a glorious Monday morning; the first group comprising two Brians, Alan and Lewis - followed 15 minutes later by Jenny, Janet, Hilary and yet one more Brian. Christmas elves - Jenny, Hilary and Janet - guarding the Christmas tree at Madingley Hall Last week we froze, this week we were basking in sunshine as we clocked up 24 miles, stopping only to enjoy coffee and cake at the Hall.
Post a Comment
Read more

A chilly Monday morning saw nine riders heading away from Shelford Rec bound for Madingley Hall; Jenny, Janet, Alan, Lewis and Brummie Brian in the first group, followed shortly afterwards by BrianC, BrianH, Jeremy and Chris. Socially distanced on the Madingley Hall terrace By the time we reached Madingley the sun was shining and most enjoyed coffee and cake as we took in the view from the Hall terrace. Trencherman BrianH, however, opted for more substantial fare, tucking into a gargantuan sausage roll - with an apologetic bit of salad on the side. Jenny and Janet enjoying coffee al fresco Returning to Shelford via Trumpington Meadows, we had clocked up 28 miles; a few miles more than planned due to Brummie Brian's wrong turning at Haslingfield. 28 miles clockwise, including a wrong turn and reversal at Haslingfield
Post a Comment
Read more