Needing very little excuse to pause while puffing our way up a hill, this time it was Paul's yell of "Knapweed broomrape!" that brought us to a standstill on the - admittedly very gentle - ascent between Shelford and Newton. Dismounting, we gathered around as Paul pointed to a brown spikey plant on the vergeside, explaining that it was a parasitic wildflower. Containing no chlorophyll, it steals its nutrients from the Greater Knapweed host, without which it cannot survive. Fairly common in the dry, calcareous areas near Cambridge, it's often found in road verges, quarries and railways. 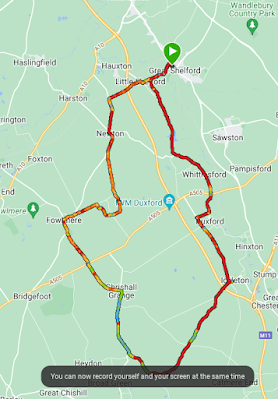 The outing also saw us try out a new coffee stop, Duxford Lodge. Very keen to encourage the cycling trade, they even promised us free cake on our next visit. We shall definitely return there!